This article with tai chi breathing tips is printed with permission from Dr. Paul Lam of tai chi productions

"What about the breathing?" Numerous students have asked me this question. Some teachers believe that breathing patterns should be very specific. For example, in each and every part of a movement, there is a specific breathing pattern-in and out, slowly or quickly. These teachers feel that the breathing has to be just so for each movement. I find this method difficult and think it can impede improvement for some students. It often leads to too much focus on the breathing and distraction from focusing on other essential principles. No two people are the same. They have different lung capacities and different speeds in their movements so to coordinate in the same specific pattern with others would be difficult for many. In addition, this can lead to forced or contrived breathing which can be harmful.

Correct breathing is an important part of tai chi. Here's a simple guide based on essential tai chi principles. The key is the storing and delivering of energy because tai chi emphasises on internal energy. Every tai chi movement alternates between gathering, storing and then delivering energy. Often the classics describe it as opening and closing. When you open, it's storing energy like someone drawing an arrow in a bow; in closing, the energy is delivering so it's like shooting the arrow. Keep this image in your mind and the rest will be easy to follow.

When you're inhaling (storing energy), think of taking in the life energy-oxygen- into your body. When you deliver energy or force, you exhale. This can be applied to almost all tai chi movements since they are, in essence, alternating opening and closing movements. 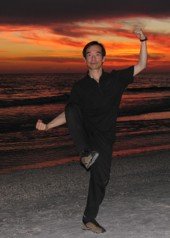 And then there's up and down movements. When you move your hands up, you're storing your energy, and therefore you breathe in. When you bring your hands down, you're delivering energy - shooting the arrow - so you breathe out. Likewise, when you stand up and bend down.

Use this guide throughout your tai chi forms. Whenever you're in doubt, focus on practising the form correctly: Relax, loosen your joints and you'll find your breathing will be correct. Don't force or hold your breath. Simply allow your body to breathe naturally when in doubt.

I have simplified the previous known abdominal and reverse abdominal breathing methods, and I have found it more powerful in energy cultivation. This is:

This breathing method is a modification of traditional qigong based on modern medical research into the deep stabilizer muscles. It helps to sink your qi to the dan tian and to enhance qi power, in turn improving internal energy. It can be incorporated into all your qigong and tai chi movements.

You can practise the breathing either sitting or standing upright. Be aware of holding the correct posture. Put left hand on your abdomen just above the belly button and right hand below it. Concentrate on your lower abdomen and the pelvic floor muscle.

When you inhale, expand your lower abdominal area - allow it to bulge out a little - and let your abdominal and pelvic floor muscles relax. You should feel a slight pushing out of the right hand.  As you exhale, gently contract the pelvic floor muscles and the lower abdomen. Feel the contraction of the muscle with your right hand, keeping the area above your belly button as still as possible. Contract the pelvic floor muscles very gently, so gently that it's almost like you're just thinking about contracting them. Another good way is to imagine that you're bringing your pelvic floor just half an inch closer to your belly button. A stronger contraction would move the left hand too much and that would mean involving different groups of muscles therefore not be as effective.

As you inhale and relax the pelvic and lower abdominal muscles, try not to relax them completely but retain approximately 10 - 20 percent of the contraction. This will allow you to maintain a upright posture and have the right group of muscles ready for the next phase.

If you can feel the qi, you can circulate it down along the conception vessel on expiration, and up along the governing vessel on inspiration. Another good way is to visualise your qi move in a straight line just beneath your skin: up to middle of your sternum (the point below two nipples) on inspiration and down to the dan tian on expiration.

Lots of food for thought about tai chi in general and lots of good advice on visualisation in tai chi and some fantastic tips to improve your tai chi breathing.